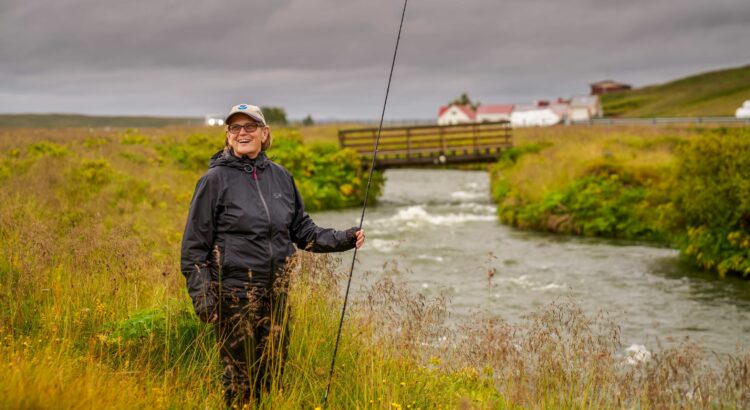 The awards are named for the Icelandic explorer Leif Erikson who is considered the first European to land in North America and who, according to the Sagas of Icelanders, established the first Norse settlement at Vinland, tentatively identified with the Norse L’Anse aux Meadows on the northern tip of Newfoundland in modern-day Canada.

Geologist, oceanographer and astronaut Kathy Sullivan is awarded the 2022 Leif Erikson Award for her lifetime of exploration for science. Born in Paterson, New Jersey in 1951, she became the first American woman to perform a spacewalk, at age 33 on October 11, 1984, on the first of her three flights into space.

In 1990 she was on the crew of Space Shuttle Discovery that deployed the Hubble Space Telescope, starting a new age of space exploration. On the Hubble deployment mission, Sullivan and the crew of Discovery reached the highest altitude ever reached by a Shuttle orbiter, at 621 kilometers above Earth’s surface. During her three missions into space from 1984 to 1992, Sullivan orbited the Earth a total of 356 times, and covered a distance of nearly 14 million kilometers in space.

After her career at NASA, Sullivan became the Chief Scientist of the National Oceanic and Atmospheric Administration, NOAA, in 1992. In 2013 she was nominated by US President Barack Obama to serve as the Administrator of NOAA. Her nomination was confirmed by the US Senate on March 6, 2014.

On June 7, 2020, Sullivan became the first woman to dive down to the Challenger Deep in the Mariana Trench, the deepest part of the Earth’s oceans. Her exploration covers a vertical distance of 632 kilometers, from 621 above the Earth’s surface, and down to 11 kilometers below sea level.

Sullivan is a member of the Society of Woman Geographers, and a fellow of the Explorers Club, where she served as Honorary Chairman from 2018 to 2019. She has visited Iceland on multiple occasions and traveled to Húsavík to visit the Exploration Museum in August 2018.

Polar explorer and preservation advocate Will Steger is awarded the 2021 Leif Erikson Award for his lifetime of exploration of the Arctic and Antarctic, and for his tireless efforts to promote preservation of these important regions of the world.

Born in Richfield, Minnesota in 1944, Steger has led some of the most significant dogsled expeditions; the first confirmed dogsled journey to the North Pole in 1986, a south–north traverse of Greenland, then the longest unsupported dogsled expedition, and the historic 5586 kilometre International Trans-Antarctic Expedition – the first dogsled traverse of Antarctica from 1989 to 1990. In 1995, Steger led the first and only dogsled traverse of the Arctic Ocean, from Russia to Ellesmere Island in Canada in 1995. Since 1991, Steger has invested a lot of his time and energy to promote the danger faced by effects of Climate Change on the Arctic regions.

Steger was the first National Geographic Society Explorer-in-Residence in 1996, and has been awarded for his feats of exploration as well as for his efforts to fight climate change.

Canadian expedition leader Geoff Green is awarded the 2022 Leif Erikson Exploration History Award, for his work on polar education and youth engagement. As the founder and president of the award-winning Students on Ice Foundation, Green has dedicated the past three decades on raising awareness and understanding of the Arctic, the Antarctic and places in between. For his work, Green has been awarded as Member of the Order of Canada. He is a fellow at the Royal Canadian Geographical Society and an international fellow at the Explorers Club.

American explorer and diversity advocate J. R. Harris is awarded the 2021 Leif Erikson Exploration History Award, for his lifetime of exploration, as well as his tireless efforts to promote diversity in exploration. Harris has been exploring and trekking long distance for more than 60 years in some of the most remote and inhospitable wilderness areas in the world, and is the author of the book Way Out There: Adventures of a Wilderness Trekker. An Emeritus Member of the Explorers Club, Harris serves on the club’s Board of Directors and Chairs the club’s committee on diversity, equity, and inclusion.

Mozambican ecologist Dominique Gonçalves is awarded the 2022 Leif Erikson Young Explorer Award for her work on elephant conservation in Gorongosa National Park. Gonçalves currently serves as Manager of the park’s Elephant Ecology Project, where she investigates elephant movement and range expansion in relation to habitat use and Human-Elephant Conflict. She hopes to build coexistence between communities and wildlife throughout the buffer-zone surrounding the park. Gonçalves is also a passionate advocate for girls’ education, and leads efforts to help prevent early marriage. In 2019, she was the narrator and main character of the award-winning film Our Gorongosa: a park for the people. In 2021 she was awarded by the Explorers Club as one of 50 explorers who are changing the world.

Spanish-Icelandic marine biologist and wildlife guide Belén García Ovide is awarded the 2021 Leif Erikson Young Explorer Award for her work in promoting ocean protection through exploration and citizen science. She has explored some of the most remote ocean areas in the world and in 2019 she founded Ocean Missions, a non-profit organization in Husavík, Iceland, where through a combination of research, citizen science, education and traditional sailing, her mission is to inspire the world to take direct actions to protect the oceans.

The awards were first given in 2015. The award ceremony has previously been hosted by President of Iceland Gudni Th. Johannesson and former President of Iceland Olafur Ragnar Grimsson. Previous awardees include Apollo 17 moonwalker Harrison Schmitt, mountaineer Edurne Pasaban, and volcanologist Clive Oppenheimer.

For more information, interview requests or contact details of winners, please contact Orly Orlyson, director of the Exploration Museum via email orly@explorationmuseum.com or by phone +354 848 7600 or Jeff Blumenfeld, chairman of the Leif Erikson Awards, via email jeff@blumenfeldpr.com.