The Mercury, Gemini, and Apollo programs were deeply complex and continuous exercises in risk management. To accomplish so much, in less than a decade, took ingenuity, strong scientific discipline, a relentless test regimen, great personal sacrifice on the part of thousands and no small amount of luck. Luck was certainly with Apollo 11, and my father was fortunate enough to spend over 2 hours on the surface of the Moon — and much of that time was spent gathering lunar samples — a task that required a substantial amount of geological training and knowledge that he received here in Iceland among other places. In the spirit of risk management, there were three prescribed methods of gathering lunar samples. The first, which was to be done shortly after stepping off the ladder, was to quickly put some small rocks into a pouch sewn into the spacesuit just above the kneecap. That way, if the lunar EVA was cut short for any reason, this so-called “contingency sample” would have been secured. The second method of gathering involved a long-handled dustbin, for lack of a better term, designed to acquire small rocks and lunar dust. The third and final implement was a long handled set of claw-like tongs which could be used to grab specific samples that, to the naked eye, appeared to be geologically significant. But to do that, one had to be able to recognize geological significance. Hence the astronaut geology training.

My father and the moon rock that he named Bok.

Much of what we now know about our solar system and the natural history of the Moon was learned from the samples retrieved during the Apollo missions. The knowledge gained was summarized in a speech my father gave at the Cincinnati Museum of Natural History in 2006 in which he anthropomorphized a moon rock that he named Bok. That speech can be found on the Internet and I encourage you all to listen to it someday for it was the whimsical culmination of the astronaut geology training that took place here so many years ago.

Rusty Schweickart and Walter Cunningham during training in Iceland.

As Rusty Schweickart or Walter Cunningham will no doubt confirm, some of the astronaut training was better than others. And from what I’ve been able to discern, both from stories and books, the geology training here in Iceland was a favorite among the astronauts. No doubt, this was partially because of the plethora of geological formations that can be found here — columnar basalt, pseudo craters, and the opportunity to climb down into volcanic cones and lava tubes. But even more memorable, I now believe based on my personal experience, was the spirit and generosity of the Icelandic people that welcomed them here. It was truly a win-win situation because the astronauts had a wonderful experience while learning information critical to the moon missions and, in return, the people of Iceland could be confident that they played an important role in the success of the Apollo space program. I’m proud to be here today representing the Armstrong family, in the small town of Húsavík at the unveiling of this inspiring monument. Many of the astronauts, including my father, came from small towns like this one, but admittedly without the magnificent ocean and the beautiful mountains in the distance. But despite the topographical differences, small towns around the world have one thing in common — and that is — that from small towns come big dreams.

My father’s big dream, as a boy of 9 or 10, was to be an airplane designer. He devoured any aviation magazine he could get his hands on. He cut out pictures of different types of airplanes, pasted them on sheets of notebook paper and kept them in a binder — labeling each one and adding notes like “sweptback wing.” And he built models — lots of them. He would fly them out the second story window of his house and, using a razor knife, he would alter their aerodynamic characteristics to see if these alterations would enable the model to fly farther. At some point if they failed to fly well, he would light them on fire for one last final flaming flight. He dreamed of winning the national model airplane championships in the United States and continued to build models in college and even as a Naval pilot in the Korean War, where as the youngest in his squadron, he had the good fortune of being looked after by the veteran pilots and where he was lucky enough to escape the deadly fate that took so many of his friends. You see, at some point in his desire to become an aircraft designer, he had determined that the best way to know how to improve an aircraft was to fly it. Even as a father, he was never a particularly talkative man, but he could talk endlessly about exploration and flying machines of any type, and he was particularly fond of those that didn’t have an engine.

Although he is sadly unable to be here to talk with you all today, he would be very pleased to see this museum and he would express his sincere hope that it would inspire some young woman or young man from the small town of Húsavík to become the first to go to Mars or perhaps Titan. In another one of his speeches, my father observed that NASA adhered to a very scientific approach to risk management. And it was that scientific rigor that caused them not to recognize any notion of superstition when they agreed to the naming of the Apollo 13 mission. He further observed that although NASA maintains that there continues to be no room for superstition in their scientific approach, the number 13 has not been a part of any mission since. 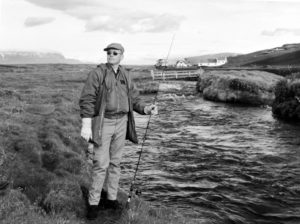 My father with his lucky red fishing hat in Iceland, 1967.

My father was not a superstitious man either, but he rarely went fishing without his lucky red fishing hat, the very same hat that he was wearing in the picture taken near here in 1967 that adorns the wall inside. And further, a picture that Örlygur Hnefill Örlygsson posted on the internet which connected us and is the reason I’m blessed to be here with you today. You’ll find my father wearing that same hat in some fishing photographs that were published in Life Magazine in the late 1960’s. Perhaps the lesson that we can learn is that no matter how hard you work and how well you manage your risks, there is absolutely no substitute for a little bit of good luck.

Speech given at the unveiling of the Astronaut Monument in Húsavík, July 15, 2015.
Photos courtesy of Bill Ingalls, Sverrir Pálsson and the NASA history office.